Where Is Tobacco Grown

Tobacco is grown in 12 EU countries. The main producers are Italy, Bulgaria, Greece, Spain and Poland, which account for around 85% of the EU tobacco growing area. There is a trend towards smaller growing areas, mainly due to falling consumption of tobacco products.

The EU produces some 200,000 tonnes of dried tobacco leaves a year. Yields vary between 1 and 3 tonnes a hectare, depending on the variety. "Flue-cured" Virginia varieties account for almost 50% of output, "light-air-cured" Burley varieties around 15%, "sun-cured" or oriental almost 35% and other varieties ("dark-air-cured" and "fire-cured") less than 3%.

In the first stage of the growing process, tobacco seeds are sown in specially constructed seedbeds. At the same time, farmers carefully prepare the soil in their fields. After two months in the beds, the seeds have grown into plants approximately 15-20 centimeters high and are ready to be transplanted to the field. The plants grow in the field for a further two to three months. Throughout the growing process, the plants are cultivated to maximize yield and quality, the soil is tended regularly, and care is taken to protect the plants from pests and disease.

In curing barns leaves will be dehydrated over a period of time. After the curing process is completed and the leaf has dried out sufficiently, fresh air is released into the curing barn, slightly moistening the leaves as to allow them to be transported for sale without crumbling. 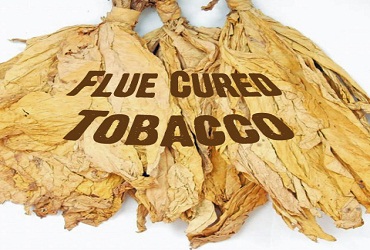 The most common curing process is known as flue-curing. Used mainly in the manufacture of cigarettes, the most common type of flue-cured tobacco is Virginia . This tobacco is also known as 'bright tobacco' because the heat-drying process gives the leaves a bright, golden colour. Originally from the south-eastern U.S. state of the same name, it is today the most grown tobacco variety in the world. Flue-cured tobacco is dried in a closed building with furnace driven heat directed from flues or pipes that extend from a furnace into the barn. The temperature of the furnace is gradually raised until the leaves and stems are completely dried. Flue-curing takes about a week and fixes the natural sugar of the leaf, which has a high sugar and a medium-to-high nicotine content.

Today, many farmers find that bulk curing flue-cured tobacco is far more cost-effective. Racks of tobacco are placed in bulk barns where heat and ventilation are controlled while air is forced through the leaves. Flue-cured varieties require warm weather, humidity, light rainfall and a sandy, loam soil for their four-month growing season.

Some tobacco leaves are air-cured following their harvest. Air-cured tobacco is traditionally cured hanging in structures with a roof, but with open sides to allow air to freely circulate. As with flue-curing, the aim of air-curing is the timely removal of moisture from tobacco leaves. This process takes four to eight weeks: If cured too fast, the leaf will become patchy, if cured too slowly, the leaf will rot away.
Commonly, air-cured tobacco is subdivided into dark air-cured and light air-cured tobacco. Burley is the second most popular tobacco in the world, belonging to the light air-cured variety. Burley, also known as White Burley tobacco, is primarily used to make cigarettes and aromatic blends, whereas dark air-cured tobaccos are mainly used in the production of chewing tobacco and snuff.

Burley is a slightly smaller plant than the flue-cured Virginia type, but with similarly broad leaves. Once picked, its leaves are dried naturally – or ‘air-cured' – without the use of extra heat. This gives the leaves a light brown to mahogany appearance and very low sugar content. Burley tobaccos are somewhat cigar-like in taste and appearance, lending themselves to the production of flavoured, blended cigarettes commonly referred to as "American". Burley tobacco can be grown in limestone soils and requires only light fertiliser. 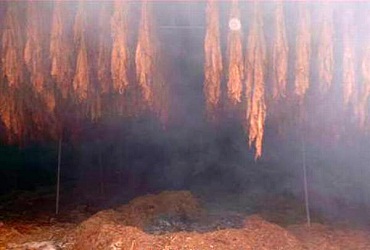 Although curing methods may vary, all fire-cured tobaccos are subjected to wood smoke to dry the leaves. It is the type of wood used to smoke the tobacco leaves and the amount of smoke exposure that gives fire-cured tobacco leaves their distinctive flavours.
Fire-cured tobacco, generally darker in colour, is used mostly for pipe tobacco mixtures, snuff, and chewing tobacco and has a low sugar but high nicotine content. Fire curing uses an enclosed barn similar to that used for flue-curing. Small fires are built on the floor, and the leaves cure in a smoke-laden atmosphere. Whereas flue-curing takes about a week, fire curing, using far lower temperatures, may take from a few days up to 4 weeks.

Fire-cured tobacco is dried with low-burning wood fires on the floors of closed curing barns. The leaves have low sugar content but high nicotine content. Fire-cured tobacco is a robust variety of tobacco used as a condimental for pipe blends, cigarettes, chewing tobacco, snuff and strong-tasting cigars.

Once the leaves are cured, the farmer sorts them according to their quality and stalk position. The leaves are then packed into bales ready to be shipped.

Removal Of The Stem

After curing, raw unprocessed tobacco leaf has its stem removed either by hand stripping the main stem from the centre of the leaf or by threshing in a machine. Some raw tobacco leaf is processed through a green leaf threshing plant. During threshing, the lamina is separated from the stem and subjected to a series of quality checks to ensure all sand, dust, scraps and foreign matter are removed. During processing, the moisture in the tobacco is brought down to a safe ‘keeping’ level and the processed tobacco is packed into 200kg cardboard boxes for shipping.